Structural complexity of marine habitats influences the diversity and function of the ecological communities they support, generally increasing species density and richness. Wreck structures have been shown to maximize fish abundance, positively affecting the wider environment, but limited data available from this deeper water site, has not yet permitted description of the health of biological resources at the Lusitania wreck to-date.

The majority of the research that has been conducted has focused on the wreck’s significance, historically and culturally. However, the structure provided across this large, diverse wreck site is expected to provide a variety of habitats for diverse biological communities. The surrounding seabed is mostly composed of sandy soft sediments. Because of their inherent structure, shipwrecks in such habitats create a network of individually isolated hard substrates available for epifaunal colonization. While studies of the surrounding mud, sand and shell substrate based habitats off the southern Irish coast have been conducted, few examine the biodiversity supported by the shipwreck habitats, and the influence these have on the ecology of the surrounding area. The faunal diversity of RMS Lusitania has not yet been studied. This work will complement the structural mapping of the site using 3D photogrammetry, by describing spatial variation in community structure within the wreck, and on proximate seabed sites for comparison.

The ecological component of this work will aim to answer the following questions:

Given sufficient time, nine 30m transects parallel to the line of the wreck will be captured (3 high on the wreck; 3 low, within its shelter; and 3 outside the structure), alongside three 60m transverse transects (see figure 1). It is estimated that one 60m transect or two 30m transects can be completed per dive, requiring a total of 8 dives within the survey window. As 16 days are available, this offers contingency for poor weather.

From these data, habitat descriptors and a species list will be developed, and biodiversity metrics calculated. This will permit investigation of the relationship between wreck structure and biodiversity, and will allow exploration of the role of the wreck in supporting marine ecosystems.

Given the depth of water, survey work will focus on HD video capture for later surface identification. Dual video will capture video transects looking simultaneously: a) forward to detect fish and other species in the water column, and b) downwards to map epifaunal species. These will be later imported into video editing software and data extracted for analysis. Soft sediment habitats can suffer from fishing practices like trawling (Freese et al., 2005) and dredging (Boyd & Rees, 2003). For example, in the North Sea, each square meter is trawled at least once a year (ICES data) and there are clues that these practices cause shift towards communities dominated by opportunistic species and species adapted to frequent perturbation (Engel & Kvitek, 1998; Freese et al., 1999). But wrecks offer some de-facto protection form these activities, as fishers tend to avoid gear damaging ‘fasters’, while also providing hard substrates for colonisation. Addition of hard substrate tends to increase the structural complexity of the seabed, potentially increasing local biodiversity.

Size and complexity of a wreck are two parameters which will affect its ability to support ecological function. Size in reefs influences total number of species, abundance and biomass, and the same is expected for wrecks. Smaller units may have greater fish density while larger reefs have higher biomass from larger, but fewer, individuals (Bohnsack et al., 1994). The effect of increased habitat complexity on fish assemblages has been clearly highlighted. This could be due to physical structural complexity of the wreck itself or a result of the maturation process of the epifauna. Fish metrics (diversity and abundance) are positively correlated with an increased habitat complexity (Gorham & Alevizon, 1989; Charbonnel et al., 2002). 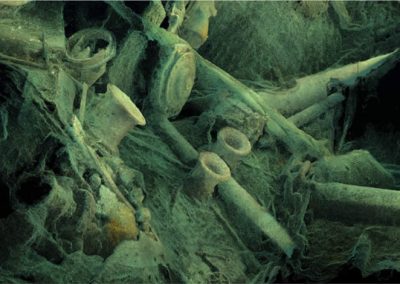 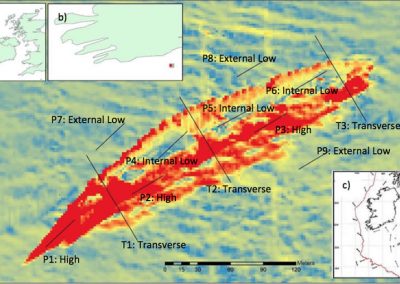 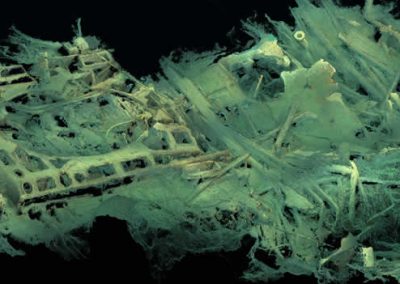 ← ROV Survey (2019) 3D Photogrammetric Survey Of The RMS Lusitania (2019) →
We use cookies on our website to give you the most relevant experience by remembering your preferences and repeat visits. By clicking “Accept”, you consent to the use of ALL the cookies.
Cookie settingsACCEPT
Manage consent